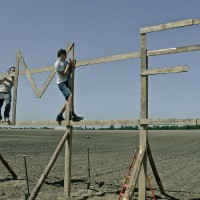 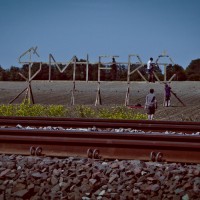 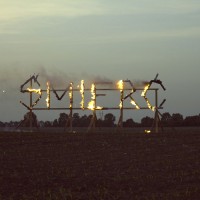 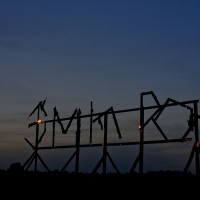 An inscription built in a boring landscape in a short distance from railway route Warsaw-Poznan
burning and exploding with fireworks while an express international train "Jan Kiepura" was passing.
Realized as a part of “We Go Far Beyond” - project. Curator: Honza Zamojski

Death is an open-air installation placed somewhere along the Warsaw – Berlin railway line. Burnt at dusk, the eponymous wooden inscription has an ephemeral character, not only thanks to its rapid burning caused by petrol and explosives, but also due to the location where the entire audience is made up of accidental passengers. Because of the high speed of the train, they can only see the work for a few seconds, which makes it impossible to determine whether the phenomenon they saw was real or not. Thus, the artist created a situation in which the installation is noticed almost by accident – this is analogous to the position of the theme of death in our culture.

WE GO FAR BEYOND

WE GO FAR BEYOND project is an elaboration of the project WE CAME FROM BEYOND (15-23 November 2007, STARTER Gallery, Poznań). Artists from WCFB had to use their experience from outside realizations in public space and build new, cohesive ecosystem in deserted flat – the seat of STARTER association. What came to being was the realization in which artist’s personal experiences mixed with skilful lecture of gallery space. Artists brought to light potential stories of this concrete flat. WE GO FAR BEYOND will go in other direction, beyond known convention where in the same time it will explore an autonomous needs of visionary creation.
WE GO FAR BEYOND won’t be an exhibition in classical sense of meaning. There won’t be any varnishing-day, there won’t be set time limit of visiting. There won’t be one stated place for the projects, the public will be accidental (no one from the audience will know that he is dealing with WGFB project). Invited artists have unlimited space and time for realizing their ideas, the only assumption here is an effort to raise a justification for every element of the project. If some project will assume the audience appearance it has to have a reason.
If WCFB was the project touching concrete space and its reading possibility, the WGFB doesn’t envisage any special place; it is rather an attempt to create a new one - creative formation of reality, where project’s validity doesn’t have to manifest itself in the influence on anybody. If WCFB was an explosion of ideas in small space and short time (although explosion rather blows up), WGFB will be an implosion in huge space, extended in time. WGFB project will treat of a space, but of undefined location, of space annexing by co producers of the project. The book describing and summarizing both projects will come out in September 2008.