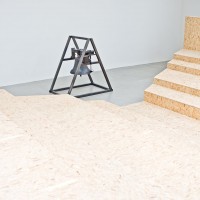 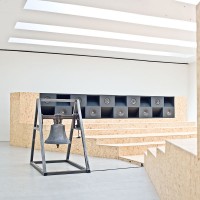 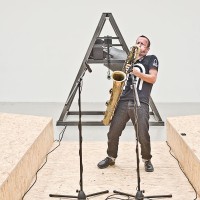 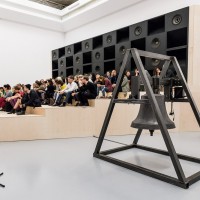 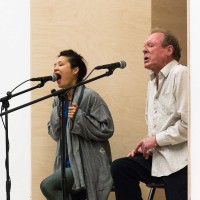 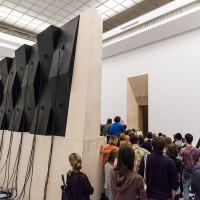 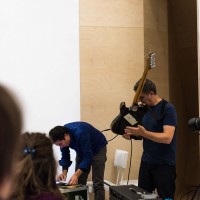 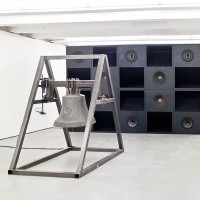 The fact that we believe in the past is actually a deduction from what we experienced in the present.

In order to understand the structure and mechanism of Konrad Smoleński’s sound installation and the evolution that it underwent after presentation in the Polish Pavilion in 2013, it is essential to start with the theoretical framework that revealed itself once the machine was designed.

The original concept of the project was inspired by the illusory nature of time as defined by Julian Barbour. This British theoretical physicist undermines the significance of time while conjuring up a vision of a timeless universe. One of the principal ideas here is that the present is perceived as a three-dimensional snapshot and the chronological ordering of events is considered a result of nothing more than our memory of individual “nows.” Therefore, time, according to Barbour, is but a sensation of temporality, enhanced by records of what we believe to have existed in the past.

In addition to Barbour’s hypotheses, the idea of the exhibition idea has been inspired by a number of other sources, all expressing the inaccuracy or exhaustion of the idea of time. These include science-fiction stories, dissertations on experiments with sound and auditory illusions.

This sense of suspended time is also typical of Samuel Beckett for whom the notion of time is one of the key issues, in terms of both text and plot structure. In Beckett’s plays, time is regarded as a persistent factor whose intervals and dimensions, generally known as the past, present and future, merge into one, with time itself becoming, in the words of the playwright, “a monster that both condemns and redeems.” Both Barbour's and Beckett's positions undermine the strictly modernist notion of progress. Indeed, they are a radical gesture of the resistance of time and its contemporary economy.

Previously shown in the Polish Pavilion at the Venice Biennale 2013, the sound sculpture Everything Was Forever, Until It Was No More - Time Test is based primarily on the manipulation of the tolling of a bell — an ancient instrument which has for centuries set the rhythm of our earthly and “eternal” lives. Smoleński shares his interest in this instrument with the Polish pioneer of electroacoustic music Eugeniusz Rudnik, who has commented:

“I started working with bells because they were hard, beautiful and new. It was a question of ambition. What can I “get out” of a bell? How can I get inside it? How can I process its sound? How can I use it to create a world of my own that would correspond with the history of the sounds of bells in our reality, our culture, our history, and not just serve as a bare “parochial” code?”

Through the process of transforming this familiar tone of church bells, Smoleński also changes its meaning: a sound that evokes a variety of associations is given an abstract frequency that seems devoid of connotations. Not only does the artist free the sound from its source by recording it in real time and then processing it, but he also resorts to the use of delay and reverberation. As a result, the enormous speakers retransmit the acoustic waves that accumulate, providing the broadcast sound with a force that affects all persons and objects in its vicinity. It appears that the acoustic signal can move the molecules of both animate and inanimate objects with an equal force.

A year after the Venice Biennale the installation has evolved as a project for CentrePasquArt in Biel (6.07-17.08.2014) and Zachęta-National Gallery in Warsaw (10.10-16.11.2014). In each location, the sound sculpture changes to reflect the characteristics of the different spaces, as if adapting to its acoustics like an instrument tuned before a performance. The permanent elements are the two hand-made iron bells and the rows of broadband speakers that echo them.

The new addition in the Swiss and Polish versions of the project, Everything Was Forever, Until It Was No More – Time Test, is the vibrating wooden platform that has been designed for the visual and acoustic nature of the space and will serve as a stage for a number of commissioned performances by renowned musicians and composers that started with the collaboration with Mats Gustafsson (in the Polish Pavilion), and being continued with Andrea Belfi and Hilary Jeffrey (in CentrePasquArt).

This year's exhibitions in Biel and Warsaw continue the process of testing the work in different environments and with various kinds of interaction. Each musician responds to the delayed and processed tones of his own instrument (among others baritone saxophone, trombone or drum kit), serving as a further tool to test the categories of sound and the visual. They also blur the distinction between the display of art and musical performance, countering the assertion of art critic and curator Thibaut de Ruyter that the qualities of a rock performance are impossible to deliver in an art exhibition:

“Seriously, who has the same excitement before entering an art gallery or a museum space? Who shouts and applauds artworks? I don’t.”

Smoleński also challenges the division between the music and art scenes through the BNNT audio performances, which he and Daniel Szwed have been giving since 2007 in urban public spaces, art institutions and festival venues. Using their van as an improvised stage, the band performs in balaclavas or masks and each performance involves a sonic attack with the use of a string instrument modeled on the Tomahawk missile (Konrad Smoleński) and a drum set (Daniel Szwed). This is an interdisciplinary project involving both public performance — so-called sound bombing — and a publishing activity.

One of the main traits of Smolenski's work is his practice of isolating elements of aesthetics common in rock culture and presenting them outside their usual context. In doing so, he abandons the linear narration that is characteristic of musical performance, developing an artistic practice that resists the temporal. Smoleński’s works combine punk rock aesthetics with the precision and elegance typical of minimalism. In his creation of audio performances and objects, the artist uses both traditional and self-constructed sound devices to examine the flow of energy and its interaction with the audience. As the science historian, Alexandra Hui has indicated:

“For 150 years, cyborg devices — weights, pulleys, electrodes, hi-fi public address systems — have manipulated bodies. Smoleński takes these objects that traditionally disembody and alienate sound and uses them to summon the past and cajole listeners into questioning their present. Musical instruments made of such artifacts as spent missile shells (his BNNT performances) or dog skulls (Niuniuni Plays on a Dog) collapse time. Similarly, the speakers of There’s no God and It’s Bigger than Me disrupt space and time through a manipulation of bodies’ expectations of sound; altering them and their interactions with each other.”

By exploring the possibilities of electricity, sound waves and PA systems, the artist manipulates the meanings we usually attribute to rock culture. These artistic experiments, as well as the ways in which Smoleński uses his “instruments” have resulted in the different editions of Everything Was Forever, Until It Was No More. According to the writer Craig Dworkin, the sound installation therefore:

“…continues, in detail, the weaponization of sound familiar from the agressive high-decibel assault of Konrad Smoleński’s performances and the militarized instrumentation of his signature baritone missile and sound bombing sculptures.”

All quotations in the text are taken from the exhibition catalogue Everything Was Forever, Until It Was No More, published in 2013 by Zachęta-National Gallery in Warsaw, distributed by Mousse Publishing.