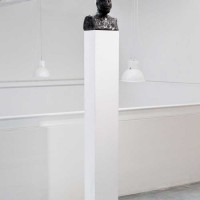 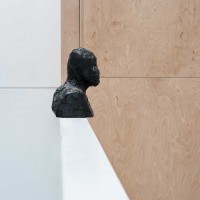 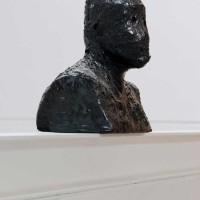 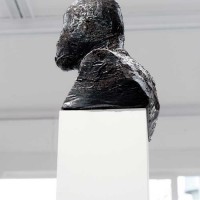 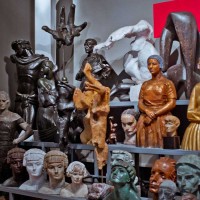 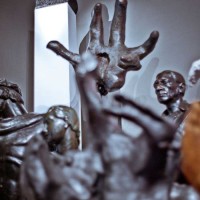 Judge is a sculpture whose shape alludes to a traditional bust on a pedestal. The sculpture, made of weak and trivial materials held together by black and partially burnt tape, and placed on an excessively tall plinth, may suggest a study on the figure of a judge.

Having special predilection for exposing spectator to shocking traps, this time Konrad Smoleński prepares perverse situation. Title “evil”, “hidden” and “black” assemble intangible element close to the essence of reality (at least in Konrad’s vision). This element, (mysterious “Something”) though takes several significant incarnations, doesn’t manifest itself directly. Why that Something exists in all probability only potentially.
Smoleński’s realizations balance on the edge of acceptability, between potency lying in energetic load (for instance the banger with lighted fuse hold in hand) and physical capabilities of surroundings. Konrad uses inflammable materials, weapons, sounds of volume and vibrations on the edge of healthy ear endurance. Many of his works made during couple last years might create the realizations’ sequence of energetic potential in various stages. At times it is lurking energy, of vent we can only imagine, the other time it is cumulated in explosion – then it hit us physically.
Konrad’s works avoid metaphor, they rather provoke/release energy which is parallel to the force present in social life or just in the world. This hidden force, seeping imperceptibly (like hum of electricity from an active speaker) is from the one side the flywheel of reality, from the other, released and uncontrolled, is capable of overturn so far status quo.
Smoleński is interested in the balance of good and evil, peace and fear, order and chaos in social life. Asking of balance he has to disturb it. Or in different way – Konrad doesn’t believe in the balance, that’s why he is tempted by subversive trends – thus he formulates the ministry of injustice, the office of disorder and harm establishing…
Exhibition Evil Hidden Black raises and develops motifs strongly rooted in Smoleński’s work. Spectator is confronted with surprising (potential) situation, perhaps the most important has already happened, or maybe it is still potential. Besides, we actually don’t know what this the most important (Something) is, we just guess that it’s accompanied by eruption. Smoleński is succeed in holding paradoxical moment, the moment imagining tense expectation and at the same time loss of energy. Elements of exhibition create a game of meanings, nervous welter of real evil and grotesque anxiously intertwined.